The world changed ten years ago. It was a shift in the American paradigm that we are all still getting adjusted to. I can barely remember life prior to September 11, 2001. I do know that nothing has ever been the same. Everything that was our way of life changed when those towers came down. I learned the value of life at the same time as I learned what the value of a symbol is. The World Trade Center was that symbol of New York City that has forever been altered and because of that, I learned how to cry.

In many ways, I have considered the New York City skyline ruined. I feel that the World Trade Center was a vital organ like an arm that was severed. NYC is an amputee of such cruel intentions. I cannot tell you how it felt to know people who worked in that building and the relief to learn they got out. The company that I worked for lost entire floors of clientele. In the end so many people died and I can say that I knew one of them.

I wont talk about being on Wall Street that day because I have told that story. I feel that I can recite that story because I have said it so many times. What I have not written about is how from that day on the ability to cry has become all too easy for me. I spent most of the day being strong and trying to survive while not trying to really take in the enormity of the day. Seeing the shock on everyone’s faces as I walked from the financial district to Grand Central station. Taking the 6 train back to the Bronx in the quietest subway car I have every been on. Then getting to my small basement apartment in the Soundview section of the Bronx where I can still see the huge pillar of smoke to remind me of what happened.

Finally getting home to watch the television to see what happened. Watching it over and over and over again because seeing images from small screens in Manhattan did not help me realize. Something was building up inside of me that finally broke when I spoke to family and friends who told they loved me and thought they would never see me again because of all the chaos. I cried. I cried like I have never cried before. I still get tears in my eyes when I think about it.

All my life, I have fought the notion that a man should not cry. But how can a man hold in emotions so strong when thousands of people have perished so close by? I learned to cry that day because I recognized the value in every thing around me. Life is so precious. I could have lost so many that day. I know of others that have lost brothers, sisters, husbands, sons, daughters, wives, and friends. I sat staring at that television for hours because I did not want to forget. I wanted to take that lesson that I learned on that day that the I could no longer live my life the same way. 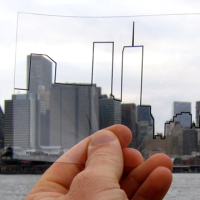 I came to Syracuse 10 years ago to escape the pain that was 9/11. I could not live with the ruined skyline in the background. I had to try to start a new life with a new career. While, I feel I have been successful, I think about how the world has changed. How I have changed. I have have become sensitive to everything around me. I cannot look at fire fighters and the police the same way. I am sensitive to loud noises. I just about cry when I think about losing a loved one. It just doesn’t take much anymore.

My students sometimes call me mean when they have no idea that how sensitive I truly am. I am mean because I see potential they are not achieving because they don’t understand that we have a chance to live in a better world. 10 years later and I know I want to go back home because even though that symbol is gone, the people who survived have become the symbols of hope needed to fill the void left by the World Trade Center and the people who once occupied that building.

2 thoughts on “The Day I Learned How to Cry”