When I think about having a discussion about comic books, I know that I just don’t stop at the books themselves. The conversation can easily turn into a debate about animation as well. Often times comic books are the inspiration for animation. In either case, diversity is always an issue. Next up on the guest blogger list: Carrie Tupper.

“You’ve got a pretty colorful crowd here. Did you check off a list or something?”

“Where are all the white people?”

This is a pretty normal response we get when people see our pitch for Kamikaze, a TV show concept that my husband, Alan and I created. See, the majority of our characters aren’t white. In fact, our core cast only has one white person in it, who also happens to be female (but that’s another discussion entirely). Because of this lack of white people we sometimes get ‘The Rainbow Coalition’ question. Did we really create our entire cast and world to simply pander to non-white audiences?

Now I do have a few confessions to make before I go any further, especially when I’m given the privilege of taking the podium here at Volume 2. You see, Alan and I are a little different from the other creators who’ve blogged this month by a few factors.

In the 1980’s and 1990’s the Rainbow Coalition of Diversity took a forefront to the TV animated world. It was like suddenly there was this checklist that had to be filled out

before anything could get the green light. The one I remember most vividly was the gang ofPlaneteers from Captain Planet, and that’s probably for good reason – they were the ones that got people talking. Every representation you could want for a racially diverse cast was there. And yet I remember being a kid and hearing adults talk so much smack about the show. “This PC crap has got to go!” Or the best one, “Real life isn’t like that!”

The kneejerk reactions against Rainbow Coalitions are founded on two perspectives. 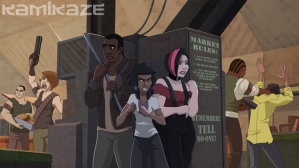 Themost often complaint is in the vein of “Political Correctness Sucks.” People who say this are simply reacting against the idea of change, acting on bigotry so deeply ingrained they don’t realize (usually) what they’re saying is harmful. The other side of this coin is the reaction that these characters are frankly mere shadows of what they could be. There’s reason to be frustrated with the concept of Rainbow Coalitions. They’re often used as shorthand vocabulary for stand ins of true diversity in any kind of media looking for an effortless way to expand their audience base and brand. Basically it’s lazy.

When we created the world of Kamikaze, we created a world still rebuilding itself in the aftermath of a global catastrophe. Our world is a diverse world because it can’t afford not to be. There’s a reason behind our world being populated with a diverse amount of people, which is why our cast has to reflect that. 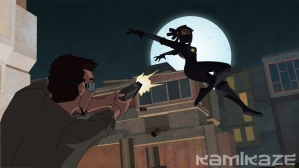 Does that mean that we pandered for the sake of diversity?

We don’t think so.

According to the Miriam Webster Online dictionary Pandering is defined as such: “To do or provide what someone wants or demands even though it is not proper, good or reasonable,” OR “to provide gratification for others’ desires.” Demanding the world be represented as diverse as we know it to be isn’t an unreasonable request. Demanding it remain a space devoid of diversity is unreasonable. If the team behind Kamikaze has been providing for anyone’s gratification, it’s been our own. With very few exceptions Kamikaze’s characters came out of the box as diverse as they are. The end goal has always been telling a compelling story with a cast of complex and vivid characters. No checklists needed. 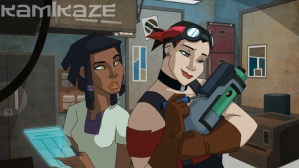 The thing is genuine diversity isn’t something limited just to race. It encompasses sexuality, gender or lack thereof, ability, body type and a host of other constantly evolving considerations. True diversity means embracing all the complexities of the world, not just the cliff notes.

Yes, there are people who do pander using the Rainbow Coalition model, but we shouldn’t let that distract us from the fact that genuine diversity isn’t pandering – it’s the path to better storytelling. 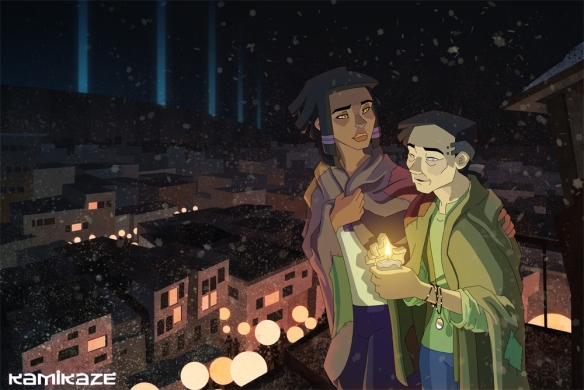 To find out more about Kamikaze: