One thing you should know about me is that I like to point out some things when it comes to race and discrimination. I often like to talk about how there is this belief that racism doesn’t really exist and the varying degrees in which people view race and oppression. The last few days we’ve been witnesses to the shit show that is The L.A. Clippers ownership. No one is surprised by this which is, in itself, a horrible thing to admit. Yet, The Clippers’ players did what so many of us who have worked for someone who is racist wished, they protested.

Here is the issue that I have with all this (besides the obvious), the anti-racists and all the other people that think racism is a thing of the past have someone to point to. Everyone is always ready to talk about the obvious racism instead of the oblivious racism. Donald Sterling has become the villain that we all can rally against and have discussions about, which is good but this is the chance to really talk about the racist people (and the policies) we don’t see at the work place.

Interestingly enough this comes at a time when the Supreme Court has ruled that Affirmative Action is now in the hands of the states. People like Justice Roberts think that people can just stop being racist. Perhaps there is an on and off switch that I’m not aware of but if this incident with Donald Sterling has taught us anything, institutional racism starts at the top. I’m sure that are many of business executives in high levels of business that feel the same way and even if there are many that do not share these sentiments, I betting that very few would fight against this thought process. 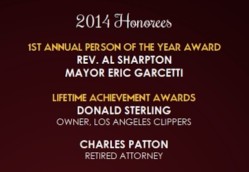 So I applaud The Clippers for their protest and the NBA players in general for showing a sense of unity. My fear is that this will be pushed under the rug eventually. This may all blow over because not enough of the right people are saying anything. Where are the other owners? They can express their “discontent” privately but we need to hear them publicly. Their silence only proves my point and I’m not talking about the silence about the latest  racist remarks via TMZ either. There has been an ongoing issue with Donald Sterling and the way he has treated black employees and tenants of his buildings. No one has said a thing and in fact, the NAACP has given him awards (Best Plantation Owner).

The old boy network protects their own. He may get admonished and take a public relations beating but guess what? If he does sells the team, it will be for BILLIONS of dollars and he will still win in terms of monetary equity. So while we may point to this man as the enemy and deem him to be the worst of all racists today, it’s really just a blip on his radar. This is why institutional racism is so much more dangerous than the obvious forms because men like him in the long run lose nothing.

I wish I had an easy answer but racism in all its forms is indeed a complicated issue. Now is the time to figure out what side you’re on because people are taking notes. One thing is for sure, there is no place for racism is this society, but are are we willing to fight it in every form or only when it rears it head via a celebrity?