After all the lights have been powered down, the boxes packed and shipped, the curtains folded, the pipe and drapes put away, and the carpets have been rolled up, I thought it was a good time for me to reflect on my day at The New York City Comic Con.

In the beginning, I debated about going. I was only able to get a ticket for one day and after the debacle with the ticket fiasco, I was convinced that no one at the NYCC really cared about us and our need to share our love of comic books and nerdom in general. Perhaps it’s the New Yorker in me that sees that the real motivation behind everything is the all mighty dollar. The commercialization of childhoods gets played out on a grand scale at these events.

But something funny happened along the way to the NY Comic Con. I began to feel the pull of representation. Last year, I made it my business to visit comic book creators and artists of color because I know how hard it is to create something that you want people to see or read. I know how hard the hustle is to push a book that no one knows about onto the masses. So I met people from Vexed Comics and I met the creator of A Reason To Smile and I realized that this comic con may not be just solely about the big companies trying to get rich off of our imaginations. All this to say, I knew that I should give this year’s NYCC a shot.

That is when I heard about Afrofuturefest.

Let’s pause here for some context. There has been a growing number of Facebook groups, hashtags, podcasts, and twitter accounts that have been exploring the growing visibility of “blerds.” You can call it either black nerds or nerds of color but one thing that’s for sure, this is a movement. The thing about this movement is that its goes far beyond Miles Morales, Black Panther, and Cyborg. This movement is about characters we’ve never hear of like The Mantamaji, Luca, or T.A.S.K. (to name a few) because these are the stories created for us by us. Podcasts like Black Comics Chat and Facebook groups like CNOC (Comic Nerds of Color) always seem to remind me that the “Big 2” are simply pandering to us.

So if you follow twitter accounts like @BlackGirlNerds and @theblerdgurl you would know that this movement isn’t a new thing. However, there’s a feeling that all of this is just starting to explode. Just knowing that these ladies who (dedicate their time to promote everything black superhero and beyond) would be at NYCC made me realize that I had to show support. I knew that I had to visit the Women in Comics table, I knew I had to visit every table @theblerdgurl posted on Tumblr, and I knew I had to meet Jamie Broadnax (Black Girl Nerds).

Which brings me to Afrofuturefest.

I’ve already went on record saying that the best part of NYCC this past weekend was the Afrofuturefest booth. It was a very large set up of tables solely comprised of creators of color with a huge banner and feeling of welcomed arrival. To explain what this is all about is simply pulling their description from the website:

A group of African-American Artists, Gamers, Filmmakers, Animators and Writers will be coming together on the MAIN FLOOR of the Jacob Javitz Center to showcase their work, meet fans, conduct interviews and celebrate all of those who love fantasy, sci-fi, horror, superheroes and pop culture.

As a writer I felt at home chatting it up. I met people. I bought books. I got signatures. I became a fan of the con again and all because I saw myself. I finally saw what it’s like to actually be visible in a industry that panders to us.

The beautiful thing about this is that this is just the beginning.

By the way, I should get a press pass huh?

I think it is pretty well established that I’m a nerd. Yet, there are very few times where I’ve pushed that nerdy envelope to it’s limit. Yes, I have over 15 boxes of comic books in my apartment, and I own replica double lightsaber, and I have a model of a the Starship Enterprise D. Yet the one thing that I have never done was go to a comic con.

Before I continue, I must say that I’ve been to comic book conventions before the glitz and the glamor that they are now. Those were the events that I would go to to search for back issues or buy action figures that I was searching for. There was never the expectation of meeting an artist or getting an autograph. I’ve been to Star Trek Convention, which up until Sunday, was the nerdiest gathering I have ever been too. But, even that event was fairly tame and calm in world of nerds and collectables these days.

I felt, going into this past weekend, that I was fully prepared for everything that the New York City Comic Con had to offer. Well, I was wrong because nothing could really prepare for how HUGE this event was. If you went through the entire event in the Jacob Javitz Center once…then you would have walked about 4 miles. I also think that I have never been to a place that had so many people that wasn’t a sporting event.

One thing is for sure is that there are a lot of freaks in NYC and I know that because I’m one of them. It was good to see people let their nerd flag fly. The cosplay was ridiculous. I saw some people that made some great costumes and to frank, I felt right at home. Let me just say that there was a serious possibility that I was was going to dress up. My girlfriend is dying to dress me up as Darth Maul. Yeah, I will just leave that thought right there.

I went in only wanting to meet two artists so they can sign some comics books I brought with me. Chris Cross didn’t show up on the day was there, but I got Jamal Igle to sign two of my Firestorm issues. This marks the first time that his has happened. Please understand that I’m not a fanatic. I think that the very act of asking someone for an autograph, without a real conversation, to be awkward. With that being said, I have gotten books autographed  from people like Juno Diaz, Miguel Melendez, Michele Carlo, Piri Thomas, Sandra Guzman, and Willie Perdomo. The difference is that I met all those people from my event work and then went to dinner with them. All of these great people were authors who have done great things with words. I was getting an signature from an artist that changed the value of a comic book and that itself is uniquely cool (even though the conversation was awkward lol).

Then we met Neal Adams, which was just an unplanned thing that occurred. I ended up meeting an old college friend who (because of his wife) knows all these comic book artists. So not only did I meet Neal Adams but he signed some prints that are just awesome. One of them is above and as you can see is of the Walking Dead, so I had to grab that. The other two will be gifts to family that I do not want to reveal at the moment, but needless to say they are just as awesome.

However, the highlight of my day was meeting another legend…George Perez. While, I didn’t get anything signed from this man, it was truly a great things to meet a man who is a legend in this industry. He drew two of my favorite books, Crisis on Infinite Earths and Avengers vs. Justice League.

All in all, we spent a better part of our Sunday bumping into people (literally). We saw some pretty cool shit like the Superman Costume Gallery. But we also saw some horrible cosplay that I cannot unsee. Besides the wall to wall display of comic books, the best thing to see was the little kids in mini outfits. If I have any kids, that is definitely happening. As for me, I wore my Black Adam shirt and my woman wore a Fantastic Four shirt. It was awesome and we will have do it again next year. 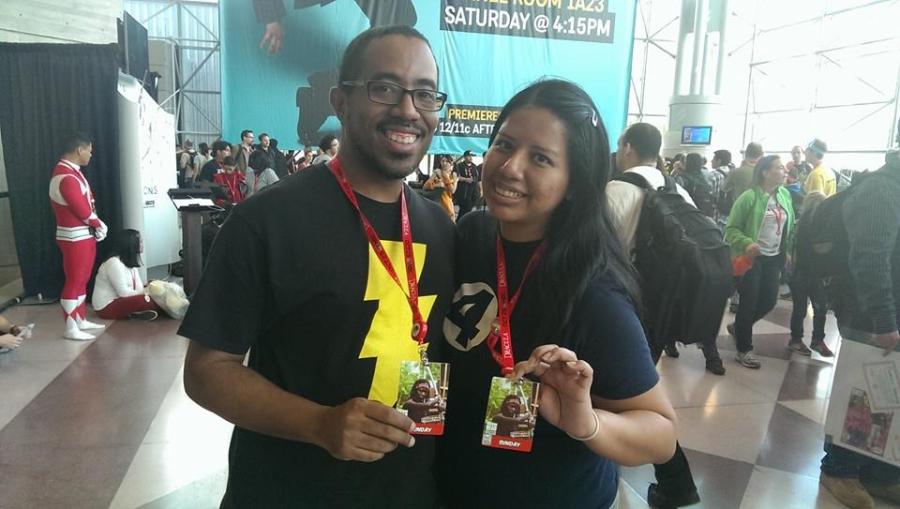