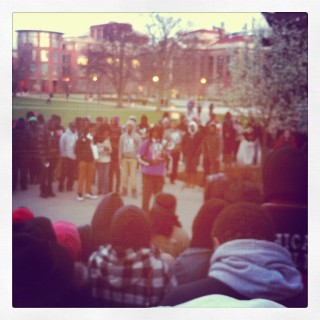 This entry was denied by the Huffington Post. So I just copied and pasted my entry.

I feel the need to apologize. I have been writing so much about Trayvon Martin in my own blog but it has taken me more than a week to calm down and address this audience without anger or frustration. As an Afro Latino, this issue hits home on so many levels.

I am very proud to be a Syracuse Alum and staff member. On March 26, I was even prouder. A group of students finally galvanized to action by having a rally on the steps of Hendrick’s Chapel on a cold Monday night. This is not just a black or white issue; this is an issue of justice. We stood in solitude with our hoodies on for Trayvon Martin.

As a person of color, I know that there are things that I should except, like the possibility being pulled over for no reason or being followed in a store. But nothing prepared me for this: a seventeen-year-old unarmed boy killed by a self appointed neighborhood watch captain. Then, even more appalling, I hear that George Zimmerman claims “self-defense,” when the only items in Trayvon’s hoodie were  a pack of skittles and a bottle of ice tea.

Without mentioning the race or ethnicity of either person, anyone of us would just assume that the killer would be reprimanded, if not sent to jail.  It is only after realizing that Travyon is black and his killer is “white” Hispanic that questions are raised as to why Zimmerman has not spent a single minute in jail.  Let’s face it, had the shooter been a Black man he would have at least seen a few nights in jail despite Florida’s Stand Your Ground Law. Yet, this had become a black and white issue for so many of us. Is it because more Latinos are considering themselves white as seen in the 2010 Census?

Perhaps it speaks to the general ignorance that people like Geraldo Rivera have, who think that a hoodie automatically represents something sinister. Is there a general perception that all black men are trying to perpetuate themselves as gangsters by wearing such apparel? Sure, it is annoying to see men wear sagging jeans with no belts.  I consistently tell students to pull up their pants, but does that justify thinking the worst of them? Yet, it is ok for a self-appointed investigative reporter to make a blanket statement about how Trayvon’s hoodie is the reason for his death. Should he know that it was raining the night Trayvon was killed, making it a perfectly reasonable chose of attire? Or perhaps it speaks to his fear of Black people in general?

It was indeed a show of solidarity when more than 100 Syracuse University students, staff, of all races, came together in a peaceful rally chanting “this is what democracy looks like.” This goes far beyond the hoodie, far beyond Geraldo, and far beyond the increasing number of reports of this teenager’s past. This is about justice. This is about an unarmed kid being killed for looking suspicious. It resonates with these students because anyone of them could have been Trayvon Martin. What gets under many students’ skin is the media’s attempt to show “a different side” of this kid by painting him as a criminal, in an attempt to justify his murder. Is that what a black or Latino Male student has to think about when walking across the quad or walking in the streets of Syracuse on cold rainy night? He has to worry about every mistake he’s ever made as a child?

So what is next? We can rally and protest this issue until George Zimmerman is behind bars, but then what? Don Sawyer, director of the LSAMP program, gave one of the best suggestions during that rally.  He suggested that the only way to promote change is to mentor a younger person.  True change comes when people are willing to commit to change and spread it to others. It is not about what we wear or how we are perceived, it is what happens when this done.

We must be the change we are looking for. That change can begin start with mentoring a young student in need. That change can begin when we continue to fight injustice and not allow ourselves the complacency to believe that race does not matter. For as long as George Zimmerman remains free we will always be remind that we as Black/Latino men and women will always be judged for what we wear and assassinated later for our exercising our right to wear whatever we want.

So what does democracy look like? Is it college students rallying as the media kills Travyon Martin over and over again, promoting the insecurities  young Black kids already face? What does justice look like? I am not sure; perhaps the hoodie of the justice system is covering the eyes of those who are apparently “standing their ground”.

I’m still angry. I am STILL troubled by all of this. I went to work today and I almost called this student who worked for “Trayvon” and it is not because he looked like him. This kid is a young black male from the city of Syracuse that is only a year older. It makes me think of the flyer I have hanging on my door from the rally the night before that says: We are all Travon.

I am still angry at Geraldo Rivera. This guy was a trailblazer in the 80’s that failed at trying to uncover Al Capone’s treasure. Look it up, it was the beginning of the end for the so called investigative reporter. It was Geraldo who said that the hoodie that Travyon wore that night was just as responsible for his death as George (Jorge) Zimmerman. After all, a hoodie is a symbol of being a thug, a gangster, or any type of negative stereotype that you can muster up.

So is a hoodie this year’s excuse for killing unarmed Black men? A few years ago, a wallet could get you 41 bullets to the body. We like to make excuses for the inexcusable. That is why there are these reports that Travyon was suspended from school and how he is a possible drug dealer. Let’s smear a dead teenager who cannot defend himself. Where is his Stand Your Ground Law? Instead we will say that his character is bad and his death was justified.

How about we blame the bag Skittles that Trayon had on him. Perhaps they were too bright and colorful. Maybe they jingled too much in his pocket or perhaps they were really drugs! Let’s blame anything except poor innocent George Zimmerman who has a black friend. All of sudden people are coming to his defense saying…oh he is hispanic…he cannot be racist. While that is only partly right, White Hispanics/Latinos can be prejudice as hell. Los Zimmermans don’t want this to be considered a hate crime because now we want to use our brown card….”damn those assholes always seem to get away.”

What Geraldo and George have in common…is fear. That fear that they will be considered in the white and black conversation. That is why Geraldo’s son is ashamed of him because I am willing to bet that little junior loves hip hop. I am betting that he wears his skinny jeans down past the crack of his ass. Papi Rivera doesn’t like that because that is too niggerish and I am quite sure there was a conversation on not bringing a black girl home.

Yet, Zimmerman is smarter that you think. See, in Florida, you can carry a gun and kill someone as long as you can say that it was self defense. That Stand Your Ground Law has given those gun touting, second amendment lovers, a reason to kill. He followed Travyon and confronted him. How is this self defense? That is like when you fight back on a bully and the teacher catches you being the aggressor and the bully becomes innocent.

Now the bully has gotten away and the media wants to make Trayvon the aggressor with his gangster hoodie and his poison Skittles.

I think about this word and it makes me think about the segregation of dark and light Latinos. It makes me think about how I thought, for the longest time, that the word “Hispanic” described me. I am sure that most Latinos can, in some ways, trace back their roots to Spain. I would think that any one of us can do that very much the same way that many African Americans have traced their DNA to tribes in in Africa.

As I explained about Latino Sexuality, the Spanish settlers wanted to breed our people out. Perhaps even erase them from the history books. Thus, descendants of the Spanish and Indigenous or Africans accounts for many of current population that resides in Latin American and the Caribbean.

Last time I looked there was a lot of dark people in these places. But you would never know based on the Media. Hispanics are what you do generally see on Univision or Telemundo. These would be the Marc Anthonys and the Ricky Martins. The fair skinned Latinos with the blond Latinas on their arm. This is what Hispanic represents to me: The lack of any perception of African or Native roots on the people.

Latino represents what I have come to know of our people. A conglomeration of skin tones and dialects. To me, this incorporates the Chicanos from Chicago, the Cubans from Miami, the Dominicans from Washington Heights, and the Puerto Ricans from New York City (plus many more, of course).

There seems to be a fundamental failure with many “Hispanics” to really see past their own culture. One of the questions I opened this blog with many months ago was, Have you seen a Black Mexican? That is a question many people have told me no to. Would they fall under the realm of Hispanics? No, probably not because they are barely considered Mexican.

I know that not all Hispanics will ever consider themselves to be anything else. After all, Latino is still a relatively new term in the grand scheme of things. If you are wondering who comes up with all this stuff or who dictates what a group of people are called, that would be the US Census.

As long as they have been counting people, they are ones come up with the names. It was not to long ago that they still had Mulatto as a category for which people can pick. Quite frankly, this department does not want to have to count every last Ecuadorian or Panamanian. They would rather just group us all into one large group and be down with it. Which is why they fell Hispanic works. So you can pick your race as Black or White and have an ethnicity of Hispanic.

In the coming years it will not matter. Latinos are multiplying that rabbits (we can’t help it we are oversexed). Perhaps when we are 50% of the population we will be able to finally pick a term that defines who we are as a whole.