I can’t fully explain how the next 8 years will play out (yes, I said eight). I can barely get a full grasp how it will feel when January 20th rolls around. The only thing that I can compare all of this to are things I’ve seen in fictional universes.

Maybe its because things don’t feel quite right. Maybe things feel out of place or a tad bit disjointed because this can’t be right life right now, can it? Donald Trump is going to be president. I was kinda hoping we would get some sort of time traveler trying to stop this shit. Unless you consider the alternative that they actually did because Hilary won… but what does that even mean? (answer: ssǝןpɹɐbǝɹ pǝʞɔnɟ ǝɹɐ ǝʍ)

So, yes, this is real life and I can only compare it to a few things.

On November 4th and 5th of 1985 these two episodes aired that depicted a few members of G.I. Joe traveling into an alternate universe (via transmutation device). They soon discovered that Cobra won and took over The United States (and the world). What followed was the discovery that everything had changed. The currency was different. The White House was made of gold. The Lincoln Memorial is now Cobra Commander Memorial (although he’s not dead).

This was a nightmare world where democracy died, where a lunatic and his cronies have taken over everything. Jobs don’t exist because it was replaced by slavery. I’ve always wondered how possible would it be for something like this to happen. How could a egotistical person like Cobra Commander win? How does that start? Hm. 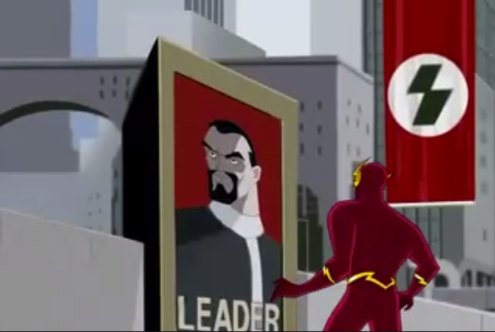 This story aired on November 9th of 2002 and its a time travel tale that involves WWII and Nazi Germany. The premise is more of, “what if the Nazis won?”  So how did this happen? Well, Vandal Savage managed to change the time stream. Green Lantern protected most of the Justice League from the temporal force that was unleashed (because they were in space doing what they do). When the JL returned to Earth they discovered that a tyrant had taken over everything.

Since most of the story revolved around going back in time to fix shit, the brief present was nothing short of an Orwellian depiction of how a government can be run by a tyrant. The only bright spot was Batman still existed but in “the resistance leader” sense. This is where I begin to think about how Nazis can run a modern day country. It doesn’t seem so far fetched now.

Star Wars (All of them)

There are many things that fascinate me about Star Wars that go beyond Jedi, the religious undertones, the father/son dynamic, and the spaceships. At the end of the day, the majority of the story is about the rise of evil and xenophobia. Chancellor Palpatine, despite being a Senator, was considered an outsider of sorts when it came to the political realm of the Republic Senate. He was voted in because the people wanted change and he thus plunged the galaxy into war that lead to him ruling it with an iron fist. Aliens, in particular, were forced to the edge of a galaxy that was ultimately run by old white men.

I think the most fascinating thing is that Palpatine was a liar and the Jedi knew it. He played everyone with lies and when he was attacked he was able to play up a non existent weakness. At the end of the day, he turned a Republic into a an Empire. At one point I couldn’t even imagine what life would be like as a citizen of this galaxy until I read a great book called Bloodline by Claudia Gray which explains the birth of the First Order from the ashes of the Empire.

All it takes is a populist candidate with a group of politicians who want to turn government on it’s head.