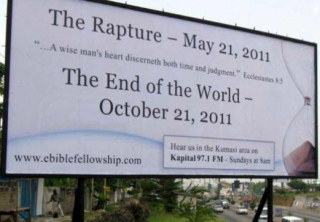 I have had a lot of fun with this end of the world stuff. My Facebook and Twitter have been filled with jokes and sayings about something that some people have taken so very seriously. But, that’s the point, isn’t it? To make light of something potentially disastrous in order for people to not really panic thinking about the actual end of the world. Of course, I never thought it was going to happen, however, I did think that it would be some real shit if it did occur.

Most of the day, I did not entertain the idea of civilization’s end. I went about the business of mowing the lawn and doing my household duties. I received a notice in the mail from the utility company, Niagara Mohawk, asking me to pay more money on a bill I already paid. So, I call them right away because I figured it was a mistake on their end. I get connected to an associate and I state my usual name, address and last four digits of my social security. Then we get into a very interesting dialogue that I will be thinking about for awhile.

He asks me if my last name was Cuban. I tell him the I am Puerto Rican/Ecuadorian. I must have come off a little stand offish at first because he asked if I was offended. I told him I wasn’t and changed my tone. I was calling to fix my situation and not get into a discussion on what diaspora my name was from. As he was looking up my issue he mentioned that I sounded very much like his father. At this point, I was thinking that there is no way I sound that old. So I tell him that! He responses that his dad was 36 when he passed…

Now, I feel like shit. I tell him that I was sorry for his loss and that yes and I am 36 as well. As we talk and he fixes my issue, he admits to me that he is tearing up because I sound so much like his dad. I tell him that perhaps this is a sign that he is watching over him. He agreed and he went about finishing his business. We continued for a few more minutes and we are about to get off the phone I tell him to take of himself and we both say “God Bless.” I hang up thinking that the universe works in mysterious ways. My bill being fixed is nowhere near as important as this dude’s validation that his father is looking over him. It just made me again think about how I need to remain grateful for the things I have.

Then there is my stepmother who called me later on in the day to tell me that if the world does end today, I should know that I am loved. Sometimes people criticize me for being too emotional, but I feel that very few people in my life truly understand that life is short! Fine, the world is not going to end but it is ok to tell people you love them anyway and that is what I did. Before 6pm, I texted some of my closest friends that I cared about that if the world does end they should know that they are indeed loved. I did this thinking about the guy on the phone. I will say that some people laughed thinking that I was joking, some never responded, but generally most told me the same thing.

My point is this simply, we never know when our time is up, whether it is collectively or singularly. We should always tell the people we know and love that we love them. Not just because they may die and we will never see them again, but because WE may die and they may never know or understand how much they mean to us. The universe does things to remind us that we are here for a purpose and while we are all laughing at these fools for this false alarm, the point of all this may have been God telling us to not take our lives for granted.