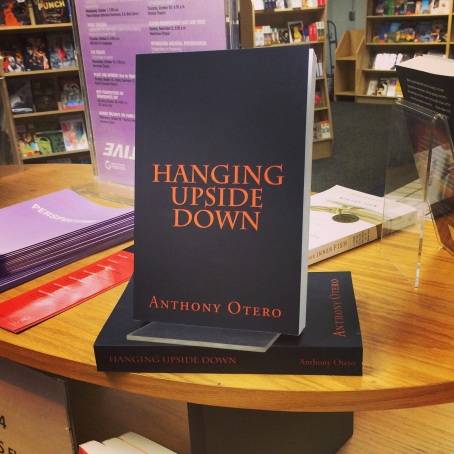 Hanging Upside Down has a bunch of 90’s hip hop references in it. I wanted to make sure that I honored what I felt was the best time for the genre. But what makes me laugh as I was drinking Merlot the other day (yeah, being an author means I drink wine – I also had a coupon), was that song Juicy from Notorious B.I.G. came into my head as thought about actually making this book a reality. Our paths are not the same but the song talks about reaching his dream.

Let’s assume you read the book or at least started to. By now you are wide eyed after reading chapter one. Perhaps you were really not expect things of that nature to happen so quickly or perhaps that situation itself was just surprising. Well, truth be told, chapter one is the key to the entire book. When I first started writing this, it was just a short story. The original title was called Revenge. I was going to add it to the numerous amount of short stories that I’ve written and done nothing with. But there was something in me that decided to just keep going and the story itself had evolved past the original title.

That feeling of I can do this permeated my thoughts as I got closer to 40 thousand words. I remembered about how I had thoughts of one day writing a book and how my past attempts have failed for one reason or another. I really thought with each chapter that something was going to stop me. I thought there would’ve been some sort of self induced writer’s block that would prevent me from finishing this. So, I kept writing to see where this whole thing was going to take me.

Then something happened on the way towards this dream. I could not stop writing! I was starting to think that I was writing too much. Was this story ever going to end? My fear of writing too little became a fear of writing too much. I’m not trying to be like Tolken and write epics that span several novels. I just wanted to tell one story and go from there. What was left was a 400+ page story about a guy who makes bad decisions.

Of course the first question I get is… Are you sure this is fiction? O_O <— my face

In the end, I think that I’ve come up with a product that men who have been in similar situations can relate to. I think women readers will see this as a juicy type of story (see what I did there?) that will be entertaining to say the least. At least, that is direction I’m getting from feedback I’ve received.

Answer: Yes, I’m sure that book is fiction based on things I’ve seen, heard, or done. lol

The real dream is being able to go on Amazon and see my book there. I don’t think that I will every get used to seeing it. I’m not used to book displays or people calling great attention to all of this when I’m around. I suppose I just want the book too speak for itself and that is the real dream.