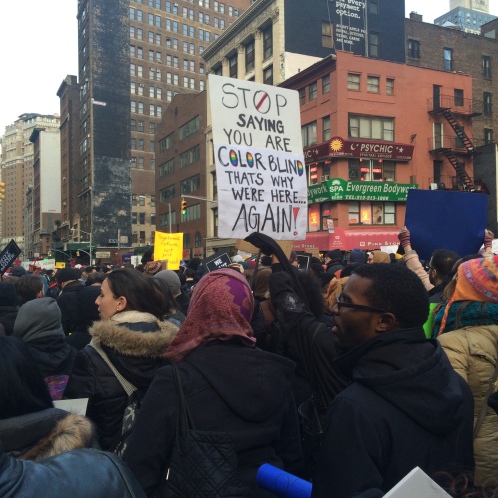 Today is the eve of Christmas Eve and as much as I really want to talk about my book and how you should all buy it because it’s on sale, I feel the need to continue to talk about what is going on around me. I find it fascinating that we’re living in a time of sheer division. Before it was about Obamacare, or gun control, or Ebola, or gay marriage, but now it’s about policing and protesting for accountability.

Once again I look at the media and see the dollar signs that sells papers and web clicks. Although I find it to be really interesting that two policeman are killed during a terrorist drill in Brooklyn, I feel bad that people have to lose their lives in order for a discussion to happen or to continue. What I can’t stand is how predictable people are.

The moment that those two police officers were killed I hoped and prayed that it was not going to “linked” to the peaceful protests of a week ago. But, in my gut, I knew that this was going to add fuel to the fire.

It’s shame those cops were killed. It’s also a shame that everyone who stands to gain political capital has taken advantage of that, which means that the sheep who believe everything they read will follow suit. Blaming the protesters for a crazy man’s deed is just as stupid as any police supporter saying we’re blaming all police for the actions of a few bad cops. Which brings us to the real problem… perception is reality.

There’s a real perception problem that is overplayed by the media. There are people who believe, with good reason, that the gangsta lifestyle has been glorified and that these “thugs” want to live that lifestyle (by the way, thug is the new “n” word, think about the that). Sure, you can point to music, movies, and video games for such attitudes but lets think about this for one second. If you’re perceived as person who wont amount to anything and you live in an area where your life means nothing then would you think you had a future? How would you act?

There are also people who believe, with good reason, that bad cops don’t exist. They’re first responders to danger and are sworn to protect and serve. If there’s an incident they respond to that must mean that thugs and criminals are present, which may be true. However, it’s only in the pages of the Batman or in television shows that police do bad things. After all, if Tamir Rice (12 years) had only listened to the police and put down the toy gun he would be alive today.

Maybe that assessment may seem unfair but bad people exist on both sides. What continues to pop up is absolutism. If you’re not with me than you’re against me. If you support Obamacare you’re anti-American. If you’re protesting police brutality then you’re against cops. Why can’t we live in the grey anymore? Why can’t our interests be mutually exclusive?

I know the answer but if I talk about race then I’m a race-baiter or I’m being divisive. We have a perception problem and it will not be fixed until we place the appropriate value on human lives.

If I talk about Mike Brown, someone will say, “he wasn’t innocent.” My response has always been, it doesn’t matter. We’re suppose to have this glorious justice system that can determine that

“Well, he’s this big guy and the cop was afraid so he had to shoot him.” My response has always been, you mean shoot him after he ran? Couldn’t Wilson shoot him in the leg? “Cops are taught to shoot to kill.” Bingo. That’s the problem. Why have a judicial system if that is truly the case?

Again, we have a perception problem because if anyone of us talk about any of these officers in a bad light in terms of history of police brutality, any guesses on the response?

It doesn’t matter they were a cops.

Perception is reality and we need to fix this.