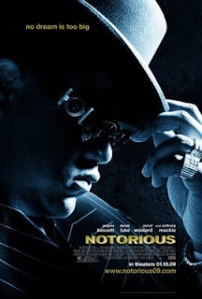 I do not go to the movies as often as I would like to so when I went to see Notorious, I was hoping to be transported back to the early 90’s. I am always amazed when a movie passes my expectations and I was indeed transoported. Notorious not only made me relive my college years but also made me dust off all of The Notorious B.I.G.’s cds. For anyone that is a hip hop fan this is a must see. This is when hip hop felt real.

I will not divulge any details, however I will express a few things:

Lil’ Kim protested her role in the film because she not portrayed accurately. Being that the film is not about her to begin with, I think that her role in the film was really not bad. She came across as someone that loved Biggie Smalls, but could not escape the fact that he only saw her as his mistress. Regardless of all that, he respected her and her skills (on mic of course…yeah yeah and that too).

Jamal Woolard, who played Christopher Wallace aka Biggie Smalls, was fantastic. He had it all down, the flow, the heavy breathing, even the laugh. Kudos to him for a great job.

Finally, I am impressed that this wasn’t a Sean Combs show. This movie was meant to be about the greatest rapper of all time and it remained that way.

Of course this movie got me to thinking, “How different would Hip Hop be today if Biggie was still alive?” While my opinions will be disputed, I am willing to defend them as well. I spent the better part of the night thinking about this and I came up with some these:

– Jay Z would not nearly be as big as he is right now. Neither would Beyonce for that matter…
– Mase would still be in Hip Hop
– 50 Cent & Lil’ Kim would have better albums
– Junior Mafia would still be around (The Lox would still suck)
– This can go without being unsaid but, the state of Hip Hop would be better

Can you imagine a song with The Notorious B.I.G., T.I., Kanye West, Lil Wayne, and vocals by T-Pain? Damn, I do miss Biggie (and Big Pun).