Skip to content
I have had something on my mind for the last few days and it feels like it falls in line with somethings that I have written about over the last several weeks. I know that I have talked about Black Latinos and how we fit into the world and one of the things that really bothers me is the ignorance of other Latinos to the fact that we are indeed Black. Not exactly of another way to put it. But it is true we are. Not just Afro-Latinos, all Latinos.
Where was this sparked off? Well, I was told by one of my students that in a meeting, of an Student Organization that I advise, one of our members made comment about why should we help an African American Organization since we are not Black. I wasn’t there. So I would only assume that she would not have made that comment if I had been there. But, then again, maybe she would have. This girl is a typical looking Latina. Long strait black hair and, is of course light skinned. I don’t consider that light, but she would fail the Brown Bag Test.
So here, again, is my issue…why the denial? The last time that I spoke about this issues, I used history as an example. This time I will use Musica Latina. Salsa & Merengue both heavily use drums to supplement any song. Some of the best song are have heavy drum beats. I would suggest that you listen to Hector Lavoe’s “Aguanile“. The introduction to this song alone is African based. The beat is very African and I could imagine any African Dance Troupe getting down to this song. I believe this song, as well as Hector Lavoe, was ahead of the times. 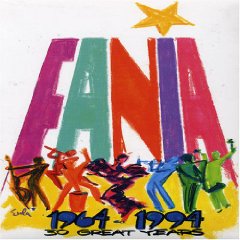 Again, as I mentioned before, my father has a substantial music collection when it comes to Salsa. Every time I go and visit him in Florida, I make sure that I swipe some music. On my last visit, I copied the CD collection that I am still rocking, Salsa: Fania All Stars. What impressed me the most about this album is the informative interludes which talk about the history of Salsa. On interlude entitled Slave Ship this is what the narrator says:

“The first roots of Salsa were African; across the ocean on slave ships filled with misery and human degradation, the hard driving tribal sound of African music had somehow survived. But shortly after it reached here, in the Caribbean, it started to evolve into something different. It was still African in flavor but the music had become unique.”

I was floored when I heard this. Not because I didn’t know, only because it was said on a this CD. Many old school Latinos don’t want to admit they have some African blood. I would assume they thought that they were either strictly indigenous or Spanish. However, the music is a dead giveaway.

Music is a link to our past, all you have to do is listen.