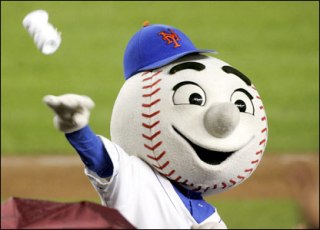 A friend of mine asked me the other day, how can a man from the Bronx be a Mets fan? She has known me for a while and wanted to know how this was possible because I should, of course, be a Yankee fan. I guess in some ways that should make sense. I grew up in the Bronx. I call it home. I feel total comfortable when I am there and would love to move back. I never let anyone forget that this and where I am from. Plus, my father is a Yankee Fan. So why am I a Mets Fan?

Well, since the second half of the season begins tonight, I figured I would answer this question. It all stemmed from my late grandfather. Mi  abuelo came to this country from Puerto Rico and moved to Brooklyn. I often heard stories about how he had to hustle to survive. Back in those times, there were immigrants from all over the world and they were all looking for the same thing, a piece of that American Dream. I remember him telling me that he was able to communicate with the Italian immigrants because Spanish and Italian was so similar. But, the one thing that really united many people in Brooklyn was the Dodgers.

The Brooklyn Dodgers was one of 3 baseball teams in New York and was loved by the people, particularly after Jackie Robinson broke the color barrier. My grandfather was just as dark as I am so I am quite sure he was delighted to see someone of our complexion running around the bases. One thing for sure was how much he disliked the Yankees. More than any NY rivalry now, the competition between the Dodgers and the Yankees was fierce and throw in additional team…the Giants…and you have a city filled with baseball freaks who have a unique love/hate thing going on.

Oddly enough, when thinking about this, many people of color loved the Brooklyn Dodgers and the New York Giants because they were some of the first teams to have black players. Jackie Robinson was the crown jewel for the Dodgers and Willie Mays was the man on the Giants. However, the Yankees were very slow in signing black players. People picketed Yankee Stadium in the early 1950’s because of this. By 1955, the Yankess finally called up Eliston Howard to play in for them.

Sadly, in 1958 the Dodgers moved to Los Angeles and mi abeulo, like the rest of Brooklyn was heart broken. But it was not just Brooklyn that had their hearts broken, the New York Giants left for San Francisco that very same year too. So up until 1962, New York was a only a one baseball team town. My grandfather refused to root for the Yankees, so when the Mets were created he was loving baseball again. He did still root for the Dodgers when they moved, but he was a New Yorker.

Mi abuleo raised all his kids to be a Dodger/Mets fans. That was just the way it was. I am not sure when the family moved to the South Bronx, but clearly a location change did not matter. By the time I came around, being a Mets fan was just apart of life. My brother followed the Mets and I followed him. Sure, there were other family members who followed the Yankees but it was my grandfather who would watch the games with me and my brother. It was the one thing that him and I could talk about. I remember him yelling in Spanish at the TV for whatever reason. He had a passion for baseball and the Mets that I still have.

Growing up in the 80’s just made it easier. I remember the Yankees always seems to play the Dodgers in the World Series and even lost to them in 1981. So, by 1984 the Mets were relevant with the their rookies like Strawberry and Gooden. By 1986, the Mets owned New York. Looking back at it, I am very glad we was alive when the Met’s won it all that year considering that my grandmother died that year and the demise of my parent’s marriage happened shortly after that.

In his remaining years, baseball was his life and I will never forget how much he loved it and how much I loved him for it. He never judged me or my father (my abulelo is from my mom’s side). I remember him coming by with sandwiches for lunch to talk about the Mets and even watch the game. He died in 1992 right before I was set to come up to Syracuse. I miss him and I will say that his love for the Mets will always be in my heart.

I wanted to add something else. I have thought about this for awhile and with the death of George Steinbrenner I had to asses any hatred for the Yankees. While I dislike them, I cannot say I hate them as I used to because, after all, they are from New York (sounding like my dad right now -_- ). I know all the Yankee players by name and how good they are. But, there isnt really anyone one player that I detest, unlike the Philadelphia Phillies, in which I can write a whole blog on Jimmy Rollins alone.

I think a lot of it comes from the fans I have come to know who just love to be assholes about everything Yankee. I am not one to believe in entitlement, but most fans do. However, some of my dearest friends are Yankee fans and I find it hard to hate something that my friends love…

P.S. I really dislike the fact that most women I am really attracted to…are Yankee Fans (go figure…I will deal though! lol)

3 thoughts on “How Am I a Met Fan…from the Bronx?”