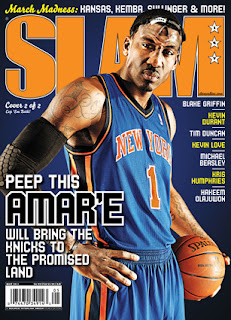 I have been waiting to write this post for a few weeks now. It turns out that there have been a few changes in the NBA that has caught my eye. The New York Knicks are relevant again. Not only are they a playoff team but they now have star power. The type of star power that raises ticket prices and gains national attention without accomplishing a thing in the playoffs. Right now it is good to be a Knicks Fan.

Of course there comes the natural debate of real fans versus the bandwagon fans versus the fair-wheather fans. Once the Knicks acquired Amare Stoudemire they became a team to watch. Knicks fans young and old united to cheer for a team that has not won a championship since 1975. It is awesome to see many people on twitter and facebook talk about how the Knicks are back. However, I would see, every so often, one person or another talk about how all of a sudden the fake Knicks were coming out the wood work.

I remember taking exception to this on more than one occasion because I know that my “sudden” interest in the Knicks may have risen some eyebrows. While I do not pay attention many of the things people say, sports in many cases is just as important as politics for men. Questioning one’s affiliation for lack of one can be the cause of fights and with the passive aggressiveness of some people on twitter, I feel that I need to make it clear right now on how much of a Knicks fan I am.

During the 80’s when the Lakers and the Celtics seemed to win everything, I remained a Knicks fan. It was easy in those days to love Magic Johnson and the Los Angeles Lakers. Perhaps it was just as easy to follow Larry Bird and the gritty Boston Celtics. Those were the only two teams that seemed to matter when I grew up. But, I was stead fast with following the Knicks. I remember Bernard King, but I also remember when Patrick Ewing was drafted.

I witnessed the wars in the 90’s when it felt impossible for the Knicks to ever get past Michael Jordan and the Chicago Bulls. I watched the Reggie Miller vs. Spike Lee game when it seemed that he would not miss! I saw when John Starks went 2-18 in Game 7 of the 1994 NBA Finals. I rooted for the Knicks when the Miami Heat became a heated a rival. I watched in horror when Ewing missed that layup against the Pacers. I cheered uncontrollably when Larry Johnson completed the 4-point play….and I could not bear to see the Spurs dominated the Knicks in the 1999 NBA Finals.

Being a Knick fan is not easy, much like a Mets fan. I can get disgusted by both ball clubs. When the Mets were horrid in the 90’s with Bobby Bonilla, I could barely watch. When management got serious and acquired Mike Piazza in a trade with the Florida Marlins, I knew that things were looking up. So yes, I followed the Knicks from afar for many years because I feel the Knicks did Ewing wrong and the team just fell apart as if ownership just did not care.

For more than a decade the Knicks were just bad. Isiah Thomas was a joke. Where was the heart? Not to mention that the NBA itself, in my opinion, just seemed to change with all the rule changes and it seemed a different type of player emerged after the Jordan era. The media was looking for someone to replace him. In any case, the Knicks were no longer relevant and when ownership doesn’t care, the fans don’t either.

So when the Knicks made a plea for Lebron James last year, I think most fans woke up because it seemed that someone in the front office may have cared that there is basketball in New York. The signing of Amare brought most of the fans back. I doubt most of us expected a championship caliber team. We just wanted a team who can compete and make the playoffs. No one thought he would be this good. An All-star starter?

Then the unthinkable happened. A dream come true for this Syracuse University Alum. The Knicks pull off a trade for Carmelo Anthony. Now, we can all envision a deep advance into the playoffs, maybe not this year, but soon. Of course, you had those who complained about giving up to much, but those complaints have fallen by the waist side.

Which leaves me with my original point. I am not a bandwagon fan. Perhaps, I am a bit of a fair weather fan (even though I went to some Knicks games when they were bad), but never question my affiliation. The New York Knicks had a way of hurting their fans with bad moves and horrible decisions. Some people who remember the Ewing years just couldn’t deal with the losing. But, it happens….and now the Knicks are back. So are we, the fans. Deal with it.