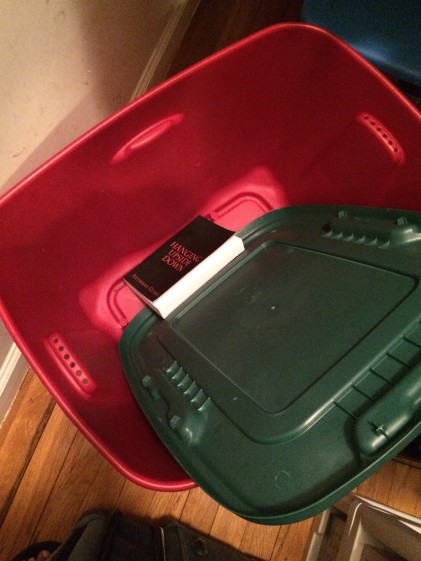 I learned a long time ago that moving is a part of life. I’ve also come to the realization that when you reside in a apartment nothing is really permanent. Rents rise and neighborhoods change so the idea of moving like a nomad should not be new. Yet, there is something unsettling about packing up all your stuff and moving to another living situation.

I grew up living in a house in the Bronx and I never really thought about moving anywhere else. But life happens, parents split up and moving from apartment to apartment became normal. I returned to the very same house as a teenager and, again, never thought I would need to move until I was admitted to Syracuse. By the time I graduated, my stuff had been condensed to storage unit standards and being nomadic was a new way of life.

Eventually, I would go back to the BX where I would live in couple of places before I moved into my own apartment. It was my first true sign of adulthood and it was glorious. But that glory was short lived because after 9/11 I had to leave the city. I found a job back in SU and I was out. Once again, I had to move my life into a small apartment a few blocks away from the University.

When I finally bought a house in Syracuse I thought, this is it. This is the last place I will ever move to (I was lying to myself). All my comic books, video games, and things that you never want to move came with me. Not to mention that all my collection of junk tripled during my stay so imagine my joy in having to box all that shit up in a U-haul when I finally decided to come back home to NYC. But still, I spent a great deal of time living in one place that I grew comfortable in knowing that moving may not be a possibility.

However, when I moved to Washington Heights a few years ago, I knew that this wasn’t going to be my last residence. Perhaps it was the residential nomad that I’ve grown accustomed to being. Maybe there’s a sense that I can’t stay in one place too long. Perhaps there’s this nagging feeling in my heart after being through two divorces (my parents and my own) that nothing lasts forever.

After all, this is all just stuff. I cannot take this crap with me. There is no storage unit in the afterlife. This point was driven home to me last week when I was helping my mother sort through my late Aunt Clara’s stuff. It was nothing but bins and boxes. Is this the sum of our physical existence? At the end of it all when I’m gone someone will be looking through my comic book boxes?

Well, currently I find myself in Harlem. A new place of residence that will probably last for about a year and half depending on what happens with my better half. I’m excited about this area because it opens up some experiences. I can visit places I never been to and I recognize the opportunity to really embrace the culture that makes this place awesome.

Moving still sucks but I know that I will be doing it again soon.

One thought on “The Move”