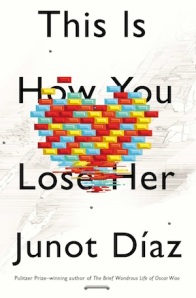 It has been a long time since I have written anything about relationships. Most of my entries have been when I was single and newly divorced. So when my woman and I were talking about how monogamy seems to be something in the past, I knew that was my opportunity to really write about something about men and woman as I once used to.

I have been in a book club for about 2 years now, maybe a little longer, and we have read many things. Last month the choice was This is How You Lose Her by Junot Diaz. I’m not quite done with it yet (I know…it was LAST month’s book), but there are some major themes here about relationships. Clearly the title gives a hint about what this book will be about and I will try not to talk too much about the contents of the book so that you can read it for yourself.

One question that may pop into your mind when reading this book may be, “Is Monogamy dead?” The book is a series of short stories that are about the different ways a man can fuck up his relationships. One can go deeper and say these are different ways a Dominican man has fucked up this relationships. Which ever case it may be, it leads to serious thoughts about the thought process of a man and how he perceives the women he loves and the women he cheats with.

As I read the book, I do not view myself in any of these scenarios. Another words, I personally do not believe that this is a representation of every man. I do, however, think that it describes many guys and how they think about love and life. What we see here is that the man in the stories often loves the woman he is in a relationship with but still chooses to go and cheat anyway (knowing that it is wrong). Some reasons for this are stated and others are ambiguous to suggest that some times men do not even understand the things they do.

Thinking about real life outside the context of this book, we are subjected to constant stories about divorce. Normally, it is on the Hollywood scene where marriages seem to last less than 2 years, but realistically, divorce has always been on the rise. What is the reason for this? Is it that monogamy is slowly become a thing of the past? Clearly I cannot answer these questions because I truly do not know. However, I do feel that the world is a lot less smaller than it once was. I also think that women are more empowered to make critical decisions about their life and their mates.

This is not say that Feminism has killed marriage. Nor is it to say that it is always the man that is fucking up the relationship (although we do not do ourselves any favors). I think we have more choices than people did 100 years ago. Strictly speaking, I am referring to life within the United States and I can tell you that this country is all about about choices. Women are career oriented with goals that include being as successful as possible. Their grandmothers never had that ability. Many times we look at the elderly who have been married for like 50-70 years and we are all wonder how in the world did they do that. Many people say it is true love. I think it might be true tolerance.

The older generations didn’t believe in divorce as much. I am quite sure there were a number of indiscretions that men have had in which his wife just dealt with it. That is not the case any more. Women can choose not to deal with it and find another mate. The reality is that monogamy is billed in the country as something we need to attain and retain because family values are part of the American Dream. Think about that for a minute. Most people are looking to get married, get a house (or condo), have 1.5 kids, and a pet. Nothing at all prepares us for divorce.

With that being said, my own divorce was something that I take much responsibility for. It wasn’t that I didn’t believe in monogamy, it was that I was too immature to really embrace it. This is what really lies within the center of man. There was never a point where I told myself that I would have to deal with being with the same women all my life. I never freaked out about that. However, for some reason, I always knew that I would eventually get a divorce. I was just lying to myself about it. I always had a feeling there would be a wife number 2. Perhaps that was my experience with the rampant divorce in my family, or maybe it was something deeper.

Does this mean that monogamy is dead. I don’t think so. I can go on Facebook right now and point out at least 15 -20 couples who seem genuinely happy. Those people who have been either married longer than I was or perhaps seem more together than I ever was. I think that monogamy is still there, we just tend to focus on the divorces and the break ups. Yes, men are assholes but that has to do with our own issues that women can’t really fix until men are ready to be fixed.

One thought on “Is Monogamy Dead?”